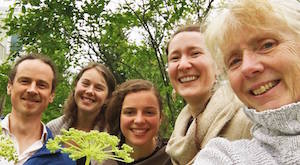 It’s been a year since we launched our first Milk Money campaign. It was a great learning experience for Louisa and me, as well as for the Burlington Herb Clinic, and we’d like to share some of our insights as you consider raising money via Milk Money.

The Burlington Herb Clinic (BHC) is a co-operative that is owned and managed by five herbalist practitioners. The Clinic was launched in Jan. 2016 by its two co-founders who negotiated a loan from their new landlord to finish the build-out of their beautiful new facility in the Railyard Apothecary building. They came to Milk Money to help them raise capital to repay this loan and cover other start-up costs.

Their campaign launched in July 2016 with a goal of $50,000. Progress was slow at first while the co-founders were focused on bringing on new worker-owners, building their herbalism practice, and managing the day-to-day responsibilities of running a business. This didn’t leave much time or creativity for marketing and promoting their Milk Money campaign through social media or events.

By Jan. 2017, they’d raised only $4,250. Under the VT Small Business Offering exemption, a campaign has to raise at least 25% of its campaign goal before it can access investor funds. For the Clinic, this amount was $12,500. It was at this point that the co-founders came to us with some good news and an interesting question. The news was that they’d re-negotiated terms with their landlord for the repayment of the original build-out costs. This significantly reduced the amount of capital they needed from their Milk Money campaign. So their question was “can we reduce our goal from $50,000 to $20,000?”

A quick phone call to VT’s Dept. of Financial Regulation confirmed this was allowable, as long as 1.) they gave notice to current investors with the option to withdraw their investment if they did not agree, and 2.) the original minimum of $12,500 remained as the trigger point at which they could access funds.

In April, we revised their original Offering Memorandum with an addendum to explain the new campaign goal and their proposed new use of funds. Following this, the co-founders stepped up their campaign efforts and by the anniversary date of June 30, 2017, they’d raised $14,250 which put them over the minimum and allowed access to funds. Since you’re allowed a one-time extension of your campaign if you’ve met your minimum, the Clinic decided to extend their campaign and by the end of July 2017 their goal of $20,000 was achieved.

Every business needs working capital to pay the rent, buy office equipment, make payroll, or generally “keep the lights on.” However, working capital is often not compelling to investors who want to see their money going toward programs that will grow the business (and therefore the likelihood they’ll get a return on their investment).

Here is how Burlington Herb Clinic described their plans for growth capital:

We…are excited to focus on investing your money in initiatives that directly expand our client base and therefore our business revenue (and returns to investors).

Our client base expansion priorities include two main areas:
1. Deepening our existing partnership with the UVM Medical Center to streamline cross-referrals between our practices.
2. Developing partnerships and programs that expand “Community Access” to herbal consultations and formulas to fixed income populations.

Other examples of growth capital are: