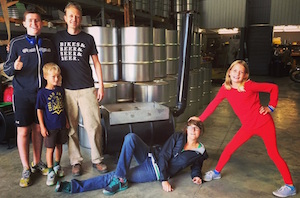 After a couple seasons of backyard maple sugaring, during which Kate and Justin McCabe spent a lot of money on propane to boil down (sometimes burn) sap on their erstwhile barbecue grill, they figured there must be a better way. Justin, an engineer and patent attorney by day, rigged up a 55 gallon drum with an exhaust stack, baffled tray and other gadgets to make an affordable, outdoor evaporator (no sugar shack required), that could handle sap from 5 to 50 taps.

It worked so well for their family, they decided to make 10 more units and post them on Craig’s List to see if anyone else was interested. When those 10 units sold out in less than two weeks, they knew they were on to something, so they called Milk Money.

They needed funding to move production out of their barn and into a proper facility, to hire a part-time builder and to purchase raw materials for the next year’s inventory. In August 2016, they launched a Milk Money campaign to raise $75,000, and by late November they’d reached the 25% Minimum that allowed them to start accessing funds. They were, in fact, the first Milk Money campaign to achieve this goal.

Kate, who by now had taken on the role of CEO (a.k.a. chief, cook and bottle-washer), did a great job of rallying friends and family in the early days of the campaign by inviting them to backyard BBQs and coffee dates. She also brushed up her social media skills and attended just about every fair or festival in Vermont to show off The Sapling, as their first product became known. These efforts contributed directly to the early success of their campaign.

After they reached their minimum and Kate was able to draw on funds to build the business, she turned her focus to doing just that (i.e. building the business). Investments continued to come in but at a much slower pace. By early summer, the campaign was about 30% funded and the 12 month deadline was looming. We called a meeting with Kate to discuss her options.

At the meeting, she gave us some exciting news: she was meeting the following week with a credit union and a couple banks about securing a line of credit. Between this and improving cash flow from sales, she felt confident that she’d have sufficient funding to continue growing and decided not to extend her Milk Money campaign. She did make one final push before the campaign deadline in late August and ended with $31,050 or 41% of her goal.

Key Learning: Partial funding can still be a success

Even though Kate did not hit her target, she considers her Milk Money campaign a success. For one thing, it gave her enough capital to implement strategic efforts in the early stage that grew sales, improved efficiency and allowed for R&D on a new product to be introduced in 2018. This demonstration of successful business traction is what led to her closing on a line of credit in Sept. 2017. Thus, the early stage capital from her Milk Money investors helped her clear the startup hurdle and become an attractive loan candidate.

The other benefit Kate has realized is that her 32 Milk Money investors are now her best brand ambassadors who help spread the word about Vermont Evaporator to their friends, family and social media networks.