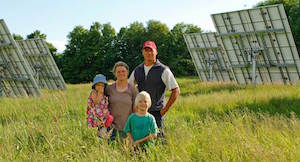 I remember when Jericho Settlers Farm was just Christa Alexander & Mark Fasching sitting under a pop-up canopy with a card table loaded with vegetables on Christa’s mom’s front yard. That was 2002 and on summer weekends I’d make sure to stuff a grocery bag in the back pocket of my bike jersey so I could stop on my way home from a ride to load up on their fresh local produce.

Back then Mark & Christa both had “day jobs” and were farming on the side. Now they’re full-time farmers with a thriving 200 acre farm in Jericho, VT, that includes sheep, pigs and poultry. Not only do they supply many local restaurants and grocery stores with their meats and vegetables, they also create great jobs for local folks, like my friend and fellow soccer mom, Lupe.

I can see first-hand the “multiplier effect” of my purchases at Jericho Settlers Farm and how it keeps money circulating throughout my community. Now a study by the UVM Medical Center documents it. In 2012, the hospital spent $1.6 million on locally sourced food from places like Jericho Settlers Farm and Misty Knoll Farm in New Haven, VT. That spending, in turn, led to an additional $1.1 million in economic activity around Vermont as the farmers made purchases at local hardware stores, sourced seeds and grain from local providers, and paid wages to local employees.